Beginning with the Right when Entertaining 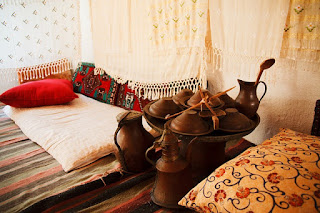 Now some people wrongfully allege, without properly grasping the texts nor giving them their due, that the Sunnah is to begin with whomever is to the immediate right of the host based on the hadiths that mention the virtue of beginning on the right.

Yet that only pertains to when those present are peers with respect to their traits, virtues, or age. In that case the host begins with whomever is to his right. Otherwise if one of the guests is distinguished from the others, by age for example, then one would begin with him by virtue of that noble trait.


Imam Ibn Rushd (i.e. Muhammad bin Ahmad who died in 520 Hijri "the grandfather" of the famous philosopher, Allah have mercy on him) in his rich and magnificent work “Al-Bayan wa al-Tahsil” says:

"When the guests are the same or similar in stature then begining from the right is what would be most fitting by way of good character. That is because doing so entails not making a show of (arbitrarily) elevating some of them over others.
Yet if it happens that among them is a scholar or someone of nobility or age then the Sunnah is to begin with him wherever he may be in the gathering, and then to move on to whomever is to his right as was done by the Messenger of Allah (ﷺ) when he was presented with a dairy beverage and to his right was a Bedouin while to his left was Abu Bakr and he drank of it then offered it to the Bedouin saying, ‘right by right’.
So the one to his left is not given, even if the prerogative would otherwise be his - by virtue of his knowledge or virtue or age - as opposed the one to the right of the distinguished guest. That applies unless permission is sought from the one on the right as was done by the Messenger of Allah (ﷺ) when he was given a beverage which he drank from with a young boy to his right and elders to his left. So he said to the young boy, ‘Will you permit me to offer this to them?’ To which came the reply, ‘No, by Allah O Messenger of Allah. I will not give preference to anyone regarding my share in anything from you.’ So the Messenger of Allah (ﷺ) heartily pressed it into the boy’s hand acknowledging and confirming that it was his right.”

Thus always beginning with the one on the right of the host is appropriate when no one present is distinguished by a trait that merits his being put forward ahead of others.
Taken from the text "On Decorum in Islam" of Shaykh Abdul Fattah Abu Ghuddah.
May Allah make us people of decorum. Amin.
This was also published by MuslimVillage.com.
Posted by Qays Arthur