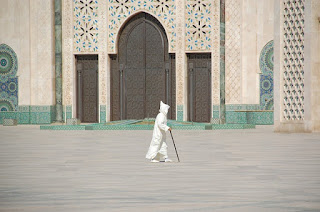 By Shaykh Abdul Fattah Abu Ghuddah (Translation by Qays Arthur)
Know that seniors (those greater in age) have tremendous standing and rights. Therefore, if you walk beside an elder walk on his right side, slightly behind him. When you come to an entrance or exit, put him before you. When you encounter him give him his due by way of greeting with salam and showing respect.
When you converse with him then let him get the first word and listen with attentiveness and awe. If during the conversation points of disagreement come up then discuss them with decorum, composure, and kindness. Lower your voice when you address him and do not forget to be gracious when doing so or when calling out to him (from afar).
Here are some hadiths and reports that substantiate these points:
“Two brothers came to the Messenger of Allah (Allah bless him and grant him peace) to inform him of an incident that occurred between them. One was older than the other. When the younger of them wanted to speak (first) the Messenger of Allah (Allah bless him and grant him peace) said, ‘Kabbir, kabbir.’” Meaning “Give the elder his right.” He then had the elder of the two speak. (Bukhari, Muslim)
Our master, the Messenger of Allah (Allah bless him and grant him peace) said, “He who does not respect our elders is not of us.” Another narration has it, “He who does not exalt our elders, nor show mercy to our young, nor acknowledge the right of our learned is not of us.” (Hakim, Ahmad, others)
Now listen to the Messenger of Allah (Allah bless him and grant him peace) impart to the youth the decorum of keeping the company of and meeting with elders, as well as their priority over the young. The distinguished companion Malik bin Huwayrith (Allah be pleased with him) said:
“The Messenger of Allah (Allah bless him and grant him peace) came to us and we were young men of like age. He had us stay with him for twenty nights during which time he was ever so merciful and kind. He eventually came to think that we must miss our families so he asked concerning those we had left behind. We informed him concerning that and he said, “Return to your families and stay with them, teach them and instruct them. When you gather for the prayer then let one of you give the call to prayer and let the eldest of you lead it.” (Bukhari and Muslim)
Taken from the text "On Decorum in Islam" of Shaykh Abdul Fattah Abu Ghuddah.
May Allah make us people of decorum. Amin.
This was also published by MuslimVillage.com.
Posted by Qays Arthur