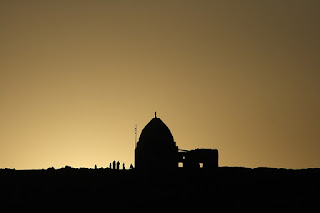 
Two murids of Imam Abul Hassan were walking behind the Imam's camel in the shade provided by the canopy of his carriage.
One said to the other, "Oh so and so I've noticed that such and such person treats you badly yet you are most excellent in conduct towards him."
He replied, "He is from my land so I say what the poet does..." He then recited some verses of poetry where Majnun sees a dog in the desert and treats it with reverence and doting affection such that the people blame and criticize him. In response to them Majnun exclaims:

"Quit the condemnation for indeed my eye did see it once near to Layla!"

Upon hearing that line the Imam leaned his head out of the carriage and asked the student to repeat it which he did. The Imam started swaying in the carriage saying, "So he said, 'Quit the condemnation for indeed my eye did see it once near to Layla!'" repeating it over and over.
Then he threw a head scarf, amber in colour, to the student and said to him, "Take this and wear it for it befits you more than me. Allah reward you well, son, for your fine commitment."
From notes on a reading of Duratul Asrar wa Tuhfatul Abrar on the life and times Imam Abul Hasan Al-Shadhili by Ibn Sabagh (Allah be pleased with them).
Posted by Qays Arthur 1 comment: